Twigz Adult Hockey League
Menu
×
×
Error
The browser you are using does not support some of the functionality needed to display the data on this page. Browsers which are known to work are Chrome, Firefox, Safari, and Edge.
League Information
The goal of the Twigz Adult Hockey League is to provide an organized, fun, and competitive recreational hockey experience for men and women of all age and skill levels. We aim to provide a competitive game experience for all players by creating an equal playing field for all participants.

Twigz will host three seasons throughout the year: Fall, Winter, and Spring.

Teams typically consist of 13 skaters and a goalie. However, teams may opt to carry 10 skaters and a goalie for an additional cost. Many teams purchase their own jerseys, but the league can provide team uniforms if needed which are to be returned at the end of the season. Team captains may submit proposed rosters, but the league makes the final decision on all rosters. Teams must remain compliant with the Team Rating Cap (see Rating System section below) throughout the season.

All of our games are held at the Toledo Ice House in Toledo, Ohio, and consist of three 17-minute stop-time periods, and are officiated by two referees and one scorekeeper. In the event of a tie, the game will go into a shootout. Each team will get three chances to score. If the score is tied after the first three shooters, it will be sudden death for up to two more shooters for each team. If the score is still tied, the game will end in a tie. Each player only gets one chance to shoot in each shootout.

We are excited to welcome new players to the league! We want you to have a fun time playing hockey, but we also need to make sure you are placed in the appropriate division for your skill set. When registering, please indicate your prior experience to give us an idea of your skills. We will assign you an initial rating and will continue to evaluate you throughout the season to determine if you are in the appropriate division and may move you mid-season if your skills are better suited for another division.

Players register individually rather than as a team. The registration form will provide a place for you to specify which other players or team you would like to skate with and although we try to honor these requests, we cannot guarantee your preferences will be met. In the event more players register than we have available roster spots, the first players to register and pay will get the spots.

Twigz offers a premier rating system that allows each division to be competitive on an equal playing field. Based off other adult hockey leagues, successful rating systems for players and team caps will help ensure each team is competitive within their division.

To help meet our goal of providing an organized, fun, and competitive hockey experience, we use a rating system to place players in the appropriate division of play. Ratings are determined by the Rating Team with input from Team Captains. Use the link below for more details about the rating system. Individual player ratings can be found using the Player Ratings link below or on our Player Profile page. Team Ratings can be calculated using the Team Rating Table link below.
TAHL Leaders
Leadership Team
Rating Team
×
A/B Division
C/D Division
×
Rating Chart 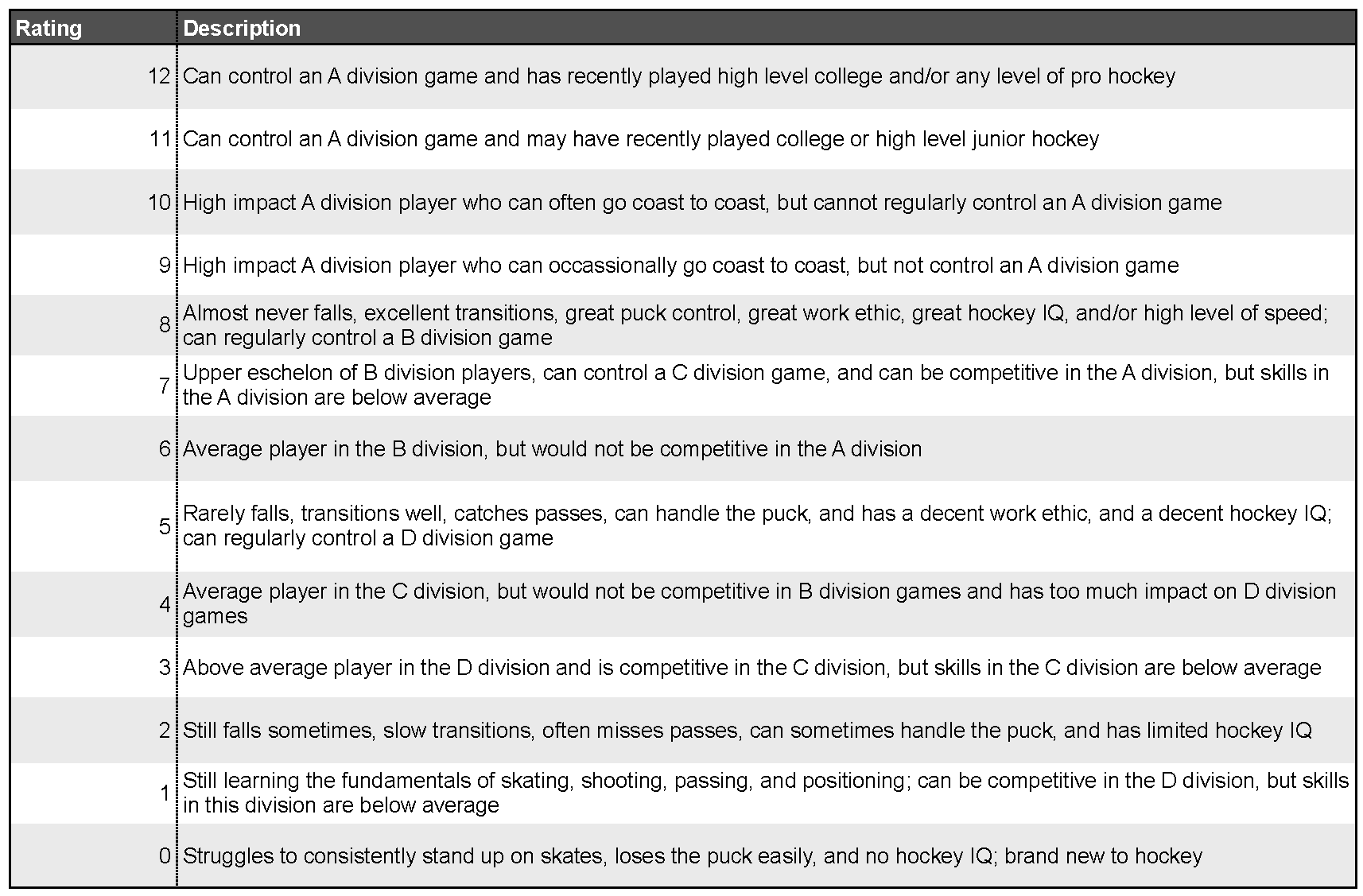 Player Ratings
The chart above provides a brief description of each rating. When reading the chart, start by looking at the descriptions for ratings 2, 5, and 8. The adjacent ratings are relative to these ratings. Ratings are generally updated at the of every season, but may be updated mid-season if necessary to reflect a player's skills. New players are given an initial rating based on their prior experience, but may have their ratings adjusted based on their level of play and consenquently may be moved to a different division at any point during the season.
Team Ratings
To build parity within divisions, a Rating Cap is established for each season. Team Ratings are calculated by taking the average of the rostered players and 2x the goalie. The caps for the Fall 2022 season are as follows: Every team must be cap-compliant for every game of the season. If a team is not cap compliant, they will forfeit the game. Every team will be granted one exception throughout the season. However, the team may only use players who are currently rostered on the team and subs who have the same or lower player ratings than the players for whom they are subbing. The rules for goalie subs are the same.